The hard competitive race in Hyvee left me like a wounded soldier shot in the butt.  I hobbled around the entire week before 70.3 Worlds not sure if I would be able to bike or run.  At the start of the week, Siri and I decided to table the issue and what and see what happened.  As the week wore on I was getting treatment and finally able to bike almost normally and start jogging very slowly by Thursday.  Siri and I decided to give it a try on race day and go as long as the pain didn’t get any worse.

Race morning was cold and crisp more fall than summer.  I woke up early and made my way to the bike transition.  At least the swim looked warmed than the air with a nice steam coming off the scenic lake in Mt. Tremblant.   The wetsuit swim would be nice and cozy both temperature wise and congestion as neoprene usually promises that things will be bunched together.  I lined myself up at the far right side hoping that would help me stay out of the fray.  It worked and I was able to get out fast and only saw Annabelle out faster to my left.  Then as the faster swimmers pulled through I was able to slot in sitting comfortably behind Jodie and Helle. 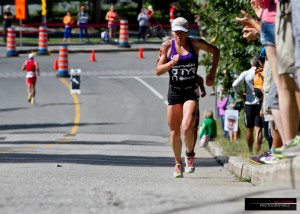 Out of the swim, I saw that we had a great group of strong athletes who I knew were all amazing cyclists.  Right away the pack was very aggressive and I had trouble getting to the front.  When I did, it only lasted for a minute as both Jodie and Daniela weren’t have any of it.  I settled in for the long hard course in Mt. Tremblant as I knew the short hills in town were my strength but the stronger girls would make me suffer out on the highway with the longer less steep grades.  I struggled as I thought I would on the way home and was completely dropped off and had to slowly work my way back up to Jodie and Helle only to be dropped again.  I ended up riding the majority of the second half of the bike on my own at some points seeing the other girls but mostly chasing solo.  It was a relief to pace the bike myself and meter out my energy to have enough to ride strong through the roly-poly out and back section that composed the last 20K of the bike ride.  I averaged 235 watts for the bike ride, and was so pleased to see that I held the power through the entire ride.

Off the bike, I noticed that my glute had really tighten up and wasn’t sure if I would be able to complete the run.  I shortened my stride and tried to just increase my cadence and not push off too hard running up the hills.  The glute was sore the entire run with a dull ache but it didn’t get worse so I continued to run.  I expected to see the entire field charge past me on the run but was pleasantly surprised that only a few went by and I finished in 5th place and was pleased to get 100% out of myself on a day when I wasn’t at my best.

I was so impressed with the top ladies.  Daniela and Jodie were both so strong balanced triathletes who swam fast, biked like they had motors, and ran strong.  Personally, it was an omen of what to expect from these two tough competitors in Kona.   I walked away from 70.3 Worlds, thesecond race in the triple crown, optimistic for my chances in Kona and pleased that I was able to race well through some challenges.  Stay tuned for the final chapter in my saga. 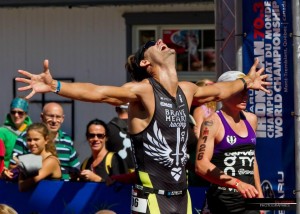 (Love this finish line shot! Nice to see someone super happy on line ;-))