I love racing in Hyvee; the organization and event team do an amazing job every year of putting together an incredible race for the professionals.  I was there in 2008, 2009, and 2010 when it was still an ITU race.  This year was my first trip back to Hyvee, and it was just as memorable as a 5150/WTC event.

Siri and I approached Hyvee with the goal of coming into the event very fit but un-rested since our target races were 70.3 Worlds and Kona.  While it may have impacted my top gear, the body is incredibly resilient and often even without much rest I can still get a very hard effort out on race day.  As a bonus, Hyvee is one of the few truly professional races where there is no downside to racing as every professional competitor walks away with a great paycheck at the end.  Almost makes our sport seem well professional!

Race day in Hyvee was exciting.  The short races are always full-gas from the gun especially with super-fish in the race like Sara McLarty and Lauren Brandon.  I had a decent swim getting only a bit bashed around a bit at the first buoy, but I was able to get past the fray with some dolphin diving on the way to the second buoy.  After the first two buoys the swim settled down and I got into a comfortable rhythm sitting on feet.

I raced onto the bike and went full gas from the start.  My legs didn’t feel bad but I didn’t have the spark in my legs that I had in Kansas.  I was very impressed with the bike legs of Jodie Swallow and Alicia Kaye.  I wasn’t able to keep their pace as they bridged up to the leader Helle Frederickson.  I rode solo the first two laps of the bike with some girls behind.  During the second half, we picked up some of the faster swimmers and Lauren Goss pulled up to ride staggered.  It was perfect as she kept our pace high during the end of the bike.

Onto the run, I saw we only a small group and had a nice gap to the next girls on the road.  Off the bike, my run legs felt average at best and a bit more sluggish than I would have liked.  II did my best to push through the run – happy it was only 10K.  With about two miles to go, all the pushing can back to bite me as I felt a strain deep in my glute.  All year I have had some trouble with that muscle but I managed to train and race gingerly to not aggravate the issue.  This time I was not so lucky.  The last two miles of the run were a bit tough as the muscle strain prevented me from pushing and extending backwards.  I held it together to finish 9th but after the race it was clear that I had done some damage.

I was so impressed with the ladies on the podium: Helle, Alicia, and Jodie were all class putting together amazing performances with incredible swims, bikes, and runs.  Personally, I learned that I am no spring chicken and trying to race a hard competitive Olympic distance race with the best in the world took its toll on my tired compensating body.  But I headed to the next stop on the Tri-ple Crown, 70.3 Worlds, with an optimistic view hoping I could be ready to roll by race day…….stay tuned for the next update. 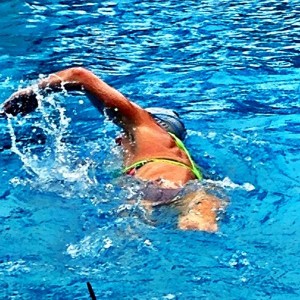