As an athlete failure is something we all face at one time or another.  For many reasons my race in Panama was what I would consider a failure.  From every misstep though is an opportunity to learn and grow as an athlete.  Luckily the more spectacular the failure the more you can learn so I have many insights I can share with you!

1.)  Heat affects everyone differently – this race taught me that I am one that requires a bit of acclimation before I can race well in the heat.  The knowledge from this race will definitely help Siri and I plan our preparation for Kona.  We will definitely not be flying in 2 days before the race.

2.)  Mental trauma from a crash has lasting impacts – I had a collision with an age grouper early in the 2nd lap of the bike and that combined with my recent memory of September’s crash left me very tentative on the bike course.  Unfortunately, a very congested 4-lap bike course requires the professionals to be aggressive and rewards that behavior. Any professional doing this race needs to ensure they are physically and mentally ready to ride aggressively in order to have their best bike performance.

3.)  Fitness in February is tricky – I thought I was too fit for February but based on my race it doesn’t appear so.  As a professional hoping to peak in the early fall, it is hard to get the fitness you need to race well in the early spring and be able to steadily build to a crescendo in the fall.  It is very hard for athletes to maintain this top end all year long.  Athletes winning in February and March always find it difficult to win in October.  If I don’t have to chase points, I much prefer to wait and start my race season at the end of the spring.

4.)  Nutrition is always something to be refined – I have had trouble in the heat with my breakfast routine.  In Kona, I always assumed that it was swallowing of seawater that led me to have trouble with puking and an inability to eat for the first 60K of the bike.  But I had the same issue in this race and the 17-minute swim was not long enough to drink that much seawater.  I think it may be time to revisit my food choices race morning.  Luckily, I was able to get down only one bottle of First Endurance EFS during the race but that one bottle plus lots of ice and water on the run got me to the finish in a four-hour plus race.  It is a tribute to First Endurance that though my race time wasn’t fast it is incredible that what little I could get in of the EFS drink allowed me to race for that long in very hot humid conditions.  It is time to have a look at what I am eating in the days leading up to and morning of a race and see if there is something causing my stomach to stop processing and puke up everything early in the race.

5.)  Flat tire quandary – This is the 2nd time I have had a flat 5K from the finish of a bike course.  For the 2nd time I just rode in the rim.  I don’t know if would have been faster to stop and change the tire or ride in on the rim.  With only 5K left in the bike, I always assume it would be faster to just ride the rim, but instead I could put some work into making my tire changes lighting fast and then avoid losing time by having to ride slowly on the rim.

6.)  Ego is a three-letter word – Actually a good whooping is great for the start of the season as long as you don’t let it hurt the ego too badly.  If I had the race that I was expecting to then I would have simply moved on from the race satisfied with the result.  As it happens, having a bad day forces you to look objectively at what you did well and poorly.  It is much harder to evaluate the race when you win.

7.)  Undefeated in 2013 and what did it do for me- I won every race I entered in 2013 and no one except me cared. In the end, it all comes down to world titles and that is the goal.  So one misstep in the beginning of the year doesn’t an entire season doom nor does a win early in the year make the year a success.  Treat every race as just what it is a test along the way to your final exam.  Obviously I’d prefer to ace every test but the final is where grades are really made.

8.)  Evaluate, learn, and forget – While I have droned on about learning from a failure, one of the keys is to also forget it quickly and move onwards.  In addition, don’t throw the baby out with the bathwater.  If you and your coach are happy with the program and training thus far, there may not need to be any major changes just minor adjustments.  A bad race may be just that a bad race.  Move on and move up it is a long year and before you know it you and everyone else will have forgotten about it.

9.)  Finally learn from the legend that is Natasha Badmann and enjoy it – I am always amazed to see Natasha beaming from ear to ear as she runs.  Whether she is having her best day or her worst, she has the same mega-watt smile.  I sometimes dwell on the pain and the hurt instead of enjoying the race as an expression of all the hard work Siri and I have put into the training.  I can’t promise I will be smiling out there at 30K into an Ironman marathon, but I can say that I will make an effort to appreciate every day knowing I have the best job in the world.  Siri often has us “how much?” meaning how much do we love it.  My answer whether I am flying or failing is infinity (oo) as I do love it more than words can do justice. 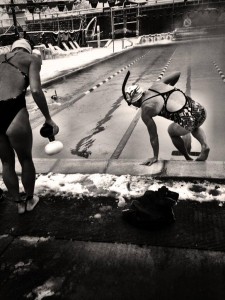 Hope you all have amazing successful seasons! But if you do fail, it is not the end of the world.  Learn something from it and move on!